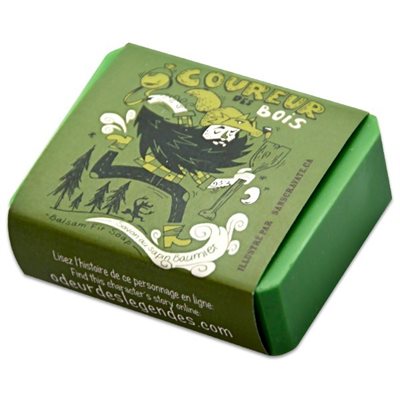 The all-natural heady forest fragrance of this outdoor soap is sure to spice up your winter evenings! Balsam fir essential oil, which is distilled right here in the Eastern Townships, is a respiratory antiseptic, a tonic, and a general stimulant.  This soap is handmade in Quebec, Canada by La Savonnerie des Diligences.

Also one of men’s favorite products, the “Coureur des bois” - a French expression for the 17th century Colonial North American adventurous fur trader - is astringent and helps keep oily skin under control, while chasing negative thoughts away!
If you are looking for a truly woody northern soap, we bet you just found THE one!

TIP OF THE SOAPMAKER: Balsam fir essential oil encourages grounding, and has anti-inflammatory properties. Beware, it is gentle enough for her, but made for him!?

Ulysse Boismenu was a seasoned merchant and coureur des bois who knew New France’s forests like the back of his hand – from mountain to river and valley to clearing. From his home base in the St. Lawrence Valley, the “bas-pays” or low country, he made some thirty canoe trips a year upriver to the wild forests of the “haut-pays.” Dancing with wolves and all forest inhabitants, he celebrated everybird call, studied every animal track in the snow and, above all, honoured every majestic tree, particularly the conifers. It is said that he distilled his own balsam fir essential oil, chewed spruce gum and drank its distillate, which he mixed with malt beer and sold to the Iroquois.

One day, after too much spruce beer, he wooed Eyota, the daughter of Chief Paco ofthe Haut-Pays and the most beautiful girl in the Iroquois village. They ran off into the forest and consummated their passion. Not long after, Ulysse, more woodlands runner than skirt chaser, returned to the Bas-Pays to continue his trade, abandoning Chief Paco’s daughter. The entire rainy season, beautiful Eyota cried tears of rageand sorrow. She gave birth to the fruit of their brief union, a girl named Huyanna,meaning “falling rain”.

In his fury, Chief Paco ordered Ulysse to be put to death, but he was never seen again.Years passed and Huyana grew. One day, she carelessly wandered away from the camp. After a night of despair that had her mother sure she had been devoured by wolves, little Huyana returned, an unusual glint in her eyes. She told her mother that a strange long-bearded coureur des bois smelling of fir had cradled her all night.