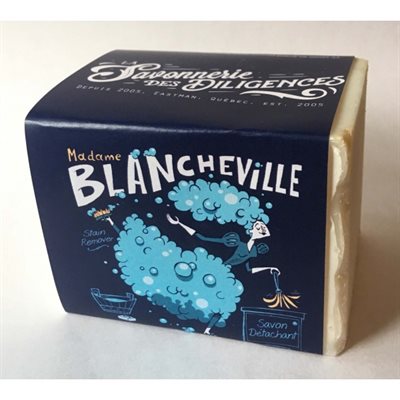 A plant-based version of traditional homemade soap, good for hand washing or to remove tough stains.  Madame Blancheville's soap cleans everything! It is useful for camping as an all-purpose cleaner and practical in a suitcase while traveling. To use without restriction everywhere in the house! Handmade in Quebec by La Savonnerie des Diligences.

- Technical Sheet: This soap with great stain removes stains such as wine, blood, blueberries, turf, earth, etc. It is not abrasive and can also be used for delicate hand washing or even as a general purpose soap for dishwashing while camping or for regular housekeeping (for example, bath cleaning).

- Properties: Do your laundry by hand and detach stubborn stains with this vegetable version of "country soap"! No more toxic and irritating solutions for the skin. Discover the great releasing power of coconut oil. Wet the stain with hot water and rub with soap. Soak the garment in hot water, then machine wash or rinse and dry, as appropriate. Soap has proven its effectiveness on stubborn stains such as blueberries, tincture, blood, oil, even in the case of "cooked" stains (whose clothes have already been dried in the dryer).

- Warning for front machines: Make sure you put less soap in your load because coconut oil really does so much.

Note from the Soapmaker: This soap is the result of a request from one of our retailers. She requested that we have an ecological, environmentally friendly and local option comparable to the Marseille soap. The result went above and beyond of the creators and consumers wildest dreams. It can remove wine, blood, blueberry, rust, hair dye, and old oil stains. Many happy customers can attest – it works great!!
(Based on 3 vote(s))
1 review(s)
$7.99 /1

Did you know that La Savonnerie des Diligences created a legend for each one of their soaps?

Solange Malo managed the laundry in Eastman over a century ago. She had built her reputation slowly and carefully over the years. One customer at a time, she always said. Every piece of clothing was laundered, bleached and pressed with care.
During the long winter months, customers tended to stay home. Solange filled her time offering free cleaning to her less well-off customers and organizing teams to collect garbage along the sides of the main roads. She made it her mission to ensure her village was clean. So delightful were the smells coming from her laundry that some customers borrowed her hangers for their own clothing so that it would be permeated with Solange’s essential oils.

On November 1st, 1907, as Solange was getting ready for a busy Christmas season of cleaning her customer’s best outfits, there was a horrible accident in the village. The newly-constructed Eastman rail bridge collapsed, killing two drivers and two engineers. Aboard the train was a cargo of grapes, and within minutes the entire village gathered to collect them to stock up for winter. Naturally, Solange was among them and was the first to spot a young man trying desperately to extract himself from the debris. With the help of several volunteers, she managed to free him. He was in a bad way, so with her usual generosity, she accompanied him to the hospital.
Multiple injuries kept him laid up there for a time, but Solange visited him daily. As it often does, nature took its course. She started calling him by his nickname, Gaston, and he yielded to the charm of this kind and considerate woman whose scent was as alluring as that of her namesake flower. The day Gaston was released from hospital, she learned his family name: Blancheville! That left no doubt – it was destined to be!

Average Rating: (Based on 3 vote(s))
Results

Depending on the shipping method selected, a time slot reservation might be required. It is recommended to reserve your time slot before adding all your products into the shopping cart. The selected time slot reservation is valid for the next 30 minutes. If you have exceeded this delay before placing your order at the checkout, you will need to select a new time slot.