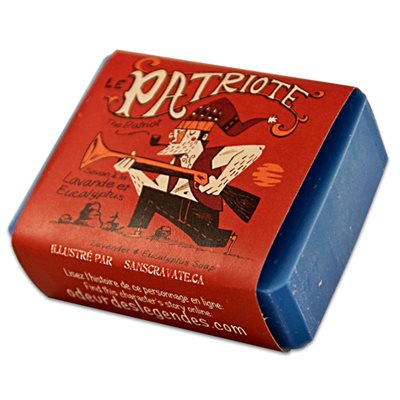 This soap is ideal for body, face and hair and is an excellent outdoor choice! Lavender soothes itchy skin when bitten by insects and wasps, and eucalyptus is known for its decongestant and antiparasitic properties.

Tip of the soap maker: This eucalyptus soap opens the airways. Used in the morning, it awakens the senses and creates the openness of the spirit for a new and welcoming day.

A 100% natural soap made with olive oil and handmade in Quebec, Canada, by La Savonnerie des Diligences.

In 1838, “Ti-Jacques” Marceau, a valiant and courageous man, joined Les Patriotes, a rebel organization created to free New France from the yoke of the English. “Ti-Jacques” quickly became an indispensable messenger, carrying coded messages to the leaders of the Rebellion, Nelson and Papineau. On the eve of a planned attack of a weapons depot in Kahnawake, he was captured in an ambush. Along with 57 other Fils de la Liberté [sons of freedom] fighters, he was charged and judged by an ad hoc military court. His sentence: seven years’ exile in Australia.

For five long months, he lived in the dark, close quarters of a frigate’s hold, seasick and without enough to eat or drink. But to Ti-Jacques, who had a keen sense of smell, the hardest part was the stench, so devoid was that place of even the most basic hygiene. When they docked in Sydney, he was relieved to set foot outdoors again.

Alas, the sensation was fleeting. Forced labour awaited. His hardy constitution got him assigned to a crew building Australia’s roads, breaking rocks hour after hour, day in day out. The only solace came from the landscape of tall eucalyptus trees swaying in the wind and their wonderful fragrance that elated his nostrils. He most preferred their perfume during rainy season, taking deep breaths that filled his lungs with oxygen. Those days, he worked ten times harder. For this exemplary conduct, his obtained a reduced sentence. So it was much sooner than expected that he began to prepare to return to his native land.

Ti-Jacques wandered the dock at Sydney Habour, plotting his return. Suddenly, a unique smell wafted its way to his nostrils. No plants or trees were around, but there was Mary Barrett, walking slowly, her hair swirling in the wind under her parasol. He was drawn to her like a magnet. A sweet smell of lavender enveloped him and took control of his spirit. He had to follow her. As he walked, he screwed up his courage to compliment her on her perfume. Finding much in common, a secret rendezvous was quickly arranged.
It was soon clear that more than fragrance united them. They were in love, and Ti-Jacques settled permanently in Australia.